I’m sure I’m not the only one who would have liked 2018 results to have been as of November 30th (or even better, October 1st). My stock forecasts were looking a lot better on those dates (and if I were smarter, perhaps I would have taken some of the gains at that point). My average gain was over 34% on October 1st (versus the S&P being up 8.5%) and was still holding at +10% as of November 30th with the S&P ahead 2.4%. Unfortunately, the year includes a disastrous December and my 4 stock picks ended the year at a 6.6% average loss. Since stock picks are always relative to the market, I take some solace in minutely beating the performance of the S&P which was down 7.0% for the year, especially since I favor very high beta stocks.

Before reviewing each of my picks from last year, I would like to provide a longer term view of my performance as it has now been 5 years that I’ve published my blog’s stock picks. Even with a down year in 2018 my compound gain is 310% versus an S&P gain of 38% over the same period. This translates to an average annual gain of 25% per year which coincidently is the target I set in my book (published years ago and now out of print). 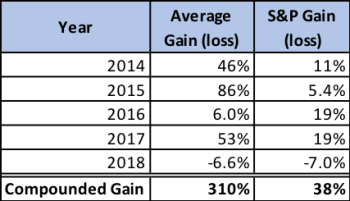 Unlike last year, I certainly cannot take a victory lap for my 10 forecasts as I missed on 3 of the 10 and barely beat the S&P for my average among my 4 stock picks (all of which will be included again in my 2019 top ten). I’ve listed in bold each of my 2018 stock picks and trend forecasts below and give a personal, and only modestly biased, evaluation of how I fared on each.

Tesla had an extraordinary Q3, 2018 as the model 3 launch showed how potent a player the company is becoming. In the quarter the Model 3 was the best selling car in the U.S. in terms of revenue and 5th highest by volume. This drove a greater than 100% revenue increase versus a year earlier and $1.75 in earnings per share versus a loss of $4.22 in the prior quarter. Given that the starting price for a model 3 was at $49,000, it is rather amazing that it could generate that volume of sales. Since the backlog for the Model 3 appears to remain at well over 300,000 cars and Tesla is closing in on a launch in Europe, Tesla seems assured of continued strong revenue through 2019 and likely beyond. However, much of the backlog is awaiting the lower priced (sub $40,000) version of the car which I believe will be available in Q2, 2019. As I had predicted, the Model 3 ramp up in production volume led to improved gross margins which exceeded 20% in the quarter. Despite the down market, Tesla stock was up about 7% in 2018. While we will continue recommending the stock, the phaseout of tax credits for buying an electric car has already begun. In its Q3 update Tesla stated that “better than expected Model 3 cost reductions is allowing us to bring more affordable options to the market sooner.” Yet, despite this forecast, the recently announced price decreases drove the stock down.

Facebook stock did not perform well in 2018, closing the year down 28%, making this pick a losing proposition last year. This comes despite revenue growth that should be between 35% and 40%, and net income that is tracking towards about 35% growth (despite a massive increase in SG&A to spur future results).  What impacted the stock heavily was the plethora of criticism regarding privacy of user information coupled with the continuing charges of Russian usage to impact the election. Before the wave after wave of negative publicity the stock had reached a new high of $218/share in July. Because of the need to improve its reputation, Facebook is likely to continue to increase its spending to address privacy issues and to burnish its image. In summary, the fundamentals of the company remained quite sound in 2018 but the barrage of issues torpedoed the stock.

While its stock dropped considerably from its September high of $2050, Amazon remained one of the best market performers in 2018 closing the year at over $1500/share. The company continued to execute well, growing every part of its business. It also began to leverage its scale as net income grew considerably faster than revenue and is likely to be well over triple that of 2017. Growth should be lower in Q4 2018 than earlier in the year as Q4 2017 was the first quarter that included all revenue from the acquisition of Whole Foods. Since the analyst consensus forecast already reflects Whole Foods revenue being in Q4 last year, as well as concerns over Amazon maintaining strong performance in Q4, I would not be surprised if Amazon was able to beat expectations in Q4.

In my forecast I stated that this was my riskiest pick and it certainly proved the most volatile (which is saying a lot given the turbulence experience by Facebook, Tesla, and Amazon). I was feeling pretty smug when the stock reached a high of $52/share in September with a little over 3 months left in the year! Obviously, I was less sanguine as it dropped precipitously from September’s high to a low point of $17.09 by year’s end. I’m hoping that those of you who followed my advice trimmed back when the stock soared (I confess that I didn’t). The company continued to balance growth and profitability throughout the calendar year with October quarter revenue (up 24%) and earnings ($10.7 million up from $1.3 million in the prior year) both beating analyst expectations. Yet, concerns over user growth severely impacted the stock. I’m somewhat surprised by this as the users grew 22% and revenue 24% – since revenue beat expectations this means that analysts did not forecast an increase in average revenue per user. But the bottom line is, despite solid fundamentals the stock did not perform well.

When I made this forecast, I pointed out that I’m not particularly good at forecasting the overall market. My belief was based on the fact that the tax cut for corporations would mean a rise in earnings that exceeded the norm. I felt stronger earnings growth would be enough to offset the risk of the longest bull market in history turning negative. I sited the likelihood of higher interest rates being an additional risk. The market almost made it through the year as it was still up heading into December, but the combination of 4 interest rate hikes in the year coupled with considerable criticism of President Trumps behavior was just too much for the market by December. I view this as a partial victory as I had all the fundamentals right and came within less than a month of being right for the year when many felt the bears would gain control in early 2018.

During the year the legalization of marijuana for recreational use continued to increase on a state by state basis with the number increasing from 6 at the start of the year to 10 by years end. Use of medical marijuana is now legal in 33 states. Several other states, while not formally legalizing it have lowered restrictions on individual use. The industry remains at a very early stage, but numerous companies are now public, and the recent market correction has the shares of most of these at more reasonable levels. While I would urge great care in stock selection, it appears that the industry has emerged as one to consider investing in.

In this prediction I cited the likelihood that at least one city would commit to testing a system of small footprint automated cars on a dedicated route (as discussed in our post on December 14, 2017) as this appears to be a more cost effective solution than rail, bus, Uber, etc. Kyoto has now announced that it signed an agreement to test the system offered by Wayfarer and the company is now out of stealth mode. Wayfarer expects to provide substantial capacity at a fraction of the cost of other alternatives: both in the initial cost of the infrastructure/equipment and the annual cost of running the system. Of course, once there is a live installation in Kyoto or one of their other prospective customers, the validity of this system will be authenticated (or not).

This forecast discussed both acquisitions of e-commerce companies by offline retailers (with Walmart leading the way) and introducing more online technology in physical stores. Walmart did continue its online buying spree in 2018 with major acquisitions of Art.com, Bare Necessities, Eloquii, Cornershop and Flipkart (the largest at $16 billion). In the case of the acquisitions that are online brands, Walmart intends to introduce these into their physical stores and continue to sell them online. Nordstrom has also moved further to integrate its online and offline business by taking valuable floor space in stores and repurposing it for online buyers to pick up and try on clothes they have purchased online. By placing the location in a very prominent spot, I’m sure Nordstrom is thinking it will help spur more customers to buy online. By having in store locations for picking up and trying on, Nordstrom should reduce returns, lower the cost of shipping, and bring additional customers into their stores (who otherwise might not visit them).

Recall that social commerce involves the integration of social media with commerce through tactics like:

Now, about 25% – 30% of shoppers say that social platforms like Pinterest, Instagram, Facebook and Snapchat have influence over their purchases. On June 28, 2018 Snapchat began a program for its influencers to use Social Commerce through a tool that allows users to view a video from the influencer and then to swipe up on a product shown in the video to buy it. In September, The Verge reported that Instagram is developing a new app for social commerce. Pinterest and Facebook have been in the social commerce fray longer and have increasing success. It appears that 2018 was the year the social commerce wars accelerated.

Carmakers face a serious problem regarding their built-in navigation systems. Consumers are forced to pay hundreds of dollars for them and then use free apps on their phones like Waze or Google maps instead. This does not endear them to consumers. The problem is that carmakers are not great at software design but have been reluctant to use third party providers for their GPS and entertainment. Now, the Renault-Nissan-Mitsubishi Alliance has agreed to design Google’s Android OS, including Google navigation, into their next generation cars expected starting in 2021. This is a win for users as that will provide a competent GPS that utilizes the existing screen in cars as opposed to having to rely on your phone app for navigation.

In another win for consumers, Amazon and Telenav (a connected car and location based services provider) announced a significant partnership today, January 7, 2019. As part of it, Amazon’s voice assistant will now be part of Telenavs in-car navigation systems. With this included, Telenav’s next generation system will enable its customers, like General Motors, to provide a “smart assistant” thereby making the system included with cars the one to use rather than one’s phone apps.

Stay tuned for my top ten predictions for 2019…but remember that I have already said the 4 stocks recommended for 2018 will remain on the list.