Many years ago it became obvious to some of us that online retail would continue to grow at a much faster pace than brick and mortar stores. This appeared to be less obvious to traditional retailers until more recently. In 2001, I suggested to some colleagues that Wal-Mart should acquire Amazon to gain an edge in online retail (Amazon stock was about $5 a share at the time). This idea was scoffed at. I bought Amazon stock but, clearly, didn’t maximize my execution as I sold it within 18 months for 3 times the return (it’s now $317). I’m guessing there were also some prescient investment bankers who received a similar response after suggesting that Wal-Mart buy Amazon. Who knows what the world would be like today had that occurred, as Amazon could easily have been derailed under Wal-Mart management.

Now, traditional retailers are under extraordinary pressure as online has matured and is expected to exceed $300 billion in U.S. sales in 2014. As online retail has claimed a larger and larger share of the overall retail business, it has sucked the air out of brick and mortar stores, and offline growth has come to a virtual standstill. With this emergence, many traditional players have finally seen the light. Wal-Mart has announced it will be increasing its online investments by a substantial amount in an effort to try to close the gap against Amazon. There has been much press about the acceleration in Wal-Mart’s online sales, and as a result, there are some who will mistakenly look at the relative growth numbers of Amazon vs. Wal-Mart’s online store and start to believe Wal-Mart is closing the gap. This could not be further from the truth as it is deceptive to compare larger numbers to smaller ones.

One reason to believe that Wal-Mart is catching up is because in the current fiscal year, the retailer is expected to grow online sales by 30% while is Amazon “only” expected to post a 20% gain, according to consensus Wall Street estimates. There are four problems with focusing on this number: 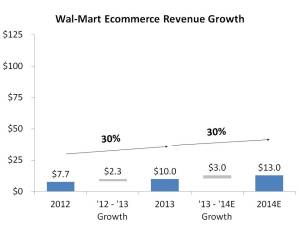 Amazon has been secretive about its third-party retailer business but does report the breakout of total services revenue from direct product revenue. They also report what amount of their services revenue is from the combination of Amazon Web Services (AWS), credit card and advertising. If we assume that the remainder is their share of third-party merchant revenue (also known as Amazon Marketplace) (which is reported on a net basis) then we are able to calculate gross third-party merchant revenue by year. The conversion of that revenue to products sold by third-party merchants is a matter of projecting what Amazon’s average referral fee is for the marketplace. If we assume that Amazon receives 15%, on average, of total marketplace sales then we are able to calculate the total of all product revenue generated by Amazon. In 2013, this would be $125 billion rather than the $74 billion reported by them as total revenue.  And this total would be up 28% rather than the reported growth of 22% for the company. 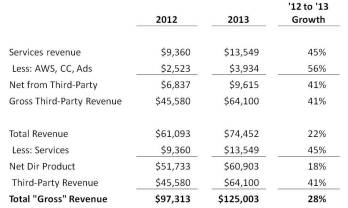 Given the fact that Amazon is adding sales (in dollars) at 5 times the rate of Wal-Mart online, the question is whether it has enough inherent advantages to continue to significantly outpace Wal-Mart. The answer is yes. The obvious reasons include: a superior online brand, a multiple of customers that are regulars, more knowledge of how to use data, a multiple of the number of products offered and lack of channel conflict. While these are not easy to replicate, if at all, an even more important issue is whether Wal-Mart’s distribution network could rival Amazon’s?

Amazon currently has 125 active end customer fulfillment centers around the world while Wal-Mart only has a handful. This may seem surprising for the world’s largest retailer but keep in mind that a distribution center for resupplying stores with inventory is a completely different animal than a fulfillment center for shipping directly to end customers. Recently, Wal-Mart has announced plans to build a 1.2 million square-foot fulfillment center in Indiana dedicated to e-commerce. Wal-Mart currently uses its 4,200 existing retail stores as a nexus for shipping to end customers. Approximately 20% of online orders are now shipped from a store. This strategy is likely much less efficient and could prove quite costly relative to Amazon fulfillment centers that have been optimized solely for online orders.

I’ve chosen to compare Amazon to Walmart, the retailer with the greatest capacity to compete with them. Others will be even harder pressed to hold off online retailers.