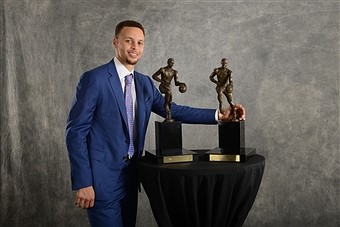 The first statistic: Primary plus Secondary Assists per Minute a player has the ball. Time with the ball equates to assist opportunity, so holding the ball most of the time one’s team is on offense reduces the opportunity for others on the team to have assists. This may lead to fewer assisted baskets for the whole team, but more for the individual player. As of the time of the post, Curry had 1.74 assists (primary plus secondary) per minute he had the ball, while Westbrook only had 1.30 assists per minute. Curry’s efficiency in assists is one of the reasons the Warriors total almost 50% more assists per game than the Thunder, make many more easy baskets, and lead the league in field goal percentage.

The second statistic: Effective Field Goal Percentages (where making a 3-point shot counts the same as making 1 ½ 2-point shots). Again, Curry was vastly superior to Westbrook at 59.1% vs 46.4%. What this means is that Westbrook scores more because he takes many more shots, but these shots are not very efficient for his team, as Westbrook’s shooting percentage continued to be well below the league average of 45.7% (Westbrook’s was 42.5% last season and is 39.6% this season to date).

The third statistic: Plus/Minus.  Plus/Minus reflects the number of points your team outscores opponents while you are on the floor.  Curry led the league in this in 2013, 2014, and 2016 and leads year-to-date this season. In 2015 he finished second by a hair to a teammate. Westbrook has had positive results, but last year averaged 3.2 per 36 minutes vs Curry’s 13.8. One challenge to the impressiveness of this statistic for Curry is whether his leading the league in Plus/Minus is due to the quality of players around him. In refute, it is interesting to note that he led the league in 2013 when Greene was a sub, Durant wasn’t on the team and Thompson was not the player he is today.

The background shown above brings me to today’s post which outlines another way of looking at a player’s value. The measurement I’m advocating is: How much does he help teammates improve? My thesis is that if the key player on a team creates a culture of passing the ball and setting up teammates, everyone benefits. Currently the value of helping teammates is only measured by the number of assists a player records. But, if I’m right, and the volume of assists is the wrong measure of helping teammates excel (as sometimes assists are the result of holding the ball most of the time) then I should be able to verify this through teammate performance. If most players improve their performance by getting easier shots when playing with Westbrook or Curry, then this should translate into a better shooting percentage. That would mean we should be able to see that most teammates who played on another team the year before or the year after would show a distinct improvement in shooting percentage while on his team. This is unlikely to apply across the board as some players get better or worse from year to year, and other players on one’s team also impact this data. That being said, looking at this across players that switch teams is relevant, especially if there is a consistent trend.

To measure this for Russell Westbrook, I’ve chosen 5 of the most prominent players that recently switched teams to or from Oklahoma City: Victor Oladipo, Kevin Durant, Carmelo Anthony, Paul George and Enes Kantor. Three left Oklahoma City and two went there from another team. For the two that went there, Paul George and Carmelo Anthony, I’ll compare year-to-date this season (playing with Westbrook) vs their shooting percentage last year (without Westbrook). For Kantor and Oladipo, the percentage last year will be titled “with Westbrook” and this year “without Westbrook” and for Durant, the seasons in question are the 2015-16 season (with Westbrook) vs the 2016-17 season (without Westbrook).

Given that the league average is to shoot 45.7%, shooting below that can hurt a team, while shooting above that should help. An average team takes 85.4 shots per game, so a 4.0% swing translates to over 8.0 points a game. To put that in perspective, the three teams with the best records this season are the Rockets, Warriors and Celtics and they had first, second and fourth best Plus/Minus for the season at +11.0, +11.0 and +5.9, respectively. The Thunder came in at plus 0.8. If they scored 8 more points a game (without giving up more) their Plus/Minus would have been on a par with the top three teams, and their record likely would be quite a bit better than 12 and 14.

Curry and His Teammates Make Others Better

How does Curry compare? Let’s look at the same statistics for Durant, Andrew Bogut, Harrison Barnes, Zaza Pachulia and Ian Clark (the primary player who left the Warriors). For Barnes, Bogut, Pachulia and Durant I’ll compare the 2015 and 2016 seasons and for Clark I’ll use 2016 vs this season-to-date.

So, besides being one of the best shooters to play the game, Curry also has a dramatic impact on the efficiency of other players on his team. Perhaps it’s because opponents need to double team him, which allows other players to be less guarded. Perhaps it’s because he bought into Kerr’s “spread the floor, move the ball philosophy”. Whatever the case, his willingness to give up the ball certainly has an impact. And that impact, plus his own shooting efficiency, clearly leads to the Warriors being an impressive scoring machine. As an aside, recent Warrior additions Casspi and Young are also having the best shooting percentages of their careers.

Westbrook is a Great Player Who Could be Even Better

I want to make it clear that I believe Russell Westbrook is a great player. His speed, agility and general athleticism allow him to do things that few other players can match. He can be extremely effective driving to the basket when it is done under control. But, he is not a great outside shooter and could help his team more by taking fewer outside shots and playing less one/one basketball. Many believed that the addition of George and Anthony would make Oklahoma City a force to be reckoned with, but to date this has not been the case. Despite the theoretic offensive power these three bring to the table, the team is 24th in the league in scoring at 101.8 per game, 15 points per game behind the league leading Warriors. This may change over the course of the season but I believe that each of them playing less one/one basketball would help.